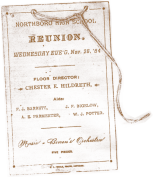 “Surely no school in America can claim to rival Northboro in this 60-year record of alumni reunions and there must be a stimulus deep seated in the hearts of the hundreds of offspring of the school which yearly impel so many of them back to gather at this simple school.”

With a history of 111 years of continuous annual meetings, the Northboro High School Association has gone through many changes. This may be the oldest such association in the country.

The first Northboro High School was in the old Town Hall which was located on Whitney Street and burned in 1870. The new high school was then built on the same land later in 1870. That same year, the Northboro High School Reunion was formed and began meeting in 1872 on Thanksgiving eve in the Town Hall for supper and dancing. Appropriate invitations were printed and a five-piece orchestra was hired for dancing. The program listed the dances on the reverse side.

By-laws were adopted in 1889 and many revisions have occurred during its long history.

In 1915 the group reformed as the Northboro High School Association and it was voted to continue the Thanksgiving eve supper/dancing program but to have the business meeting in the summer. The dates for these summer meetings changed each year with the group meeting in the Unitarian Church. In the beginning they met for a picnic lunch, fellowship during the afternoon, then a chowder supper followed by the business meeting and entertainment. This always included musical selections and/or readings by alumni or people brought in from outside the group. Some years the entertainment was presented prior to the business meeting due to the extreme heat of the day.

A new high school was built on Main Street in 1924 and at the meeting that year, the group toured the new school. Some were overheard to say they “wished they were back in school.”

Over time meetings were held in the school, the Historical Society museum or in the Unitarian Church. In 1928, the Thanksgiving eve supper/dance was discontinued. The dual meetings each year was only broken once in 1919 when the summer annual meeting was cancelled due to World War I.

The first group picture was taken in 1931 with 130 alumni present. The Northboro Grange prepared supper for the meetings some of the time and in 1935, the cost per plate was 50 cents. It was voted at that meeting to charge 25 cents per plate the following year with the balance to be taken from the treasury.

An alumni wrote a lengthy piece for the reunion in 1932 and this quote is taken from that piece: “Surely no school in America can claim to rival Northboro in this 60-year record of alumni reunions and there must be a stimulus deep seated in the hearts of the hundreds of offspring of the school which yearly impel so many of them back to gather at this simple school.”

During World War II, the names of alumni serving in the military were read into the minutes. It was also the custom to read a list of deceased alumni at each meeting with the assembly standing.

Simeon Fouracre, Class of ‘35 donated coffee mugs with a picture of the high school printed on them. They were presented to all members of the 50-year class at the annual meeting starting in 1986.

The Class of ’39 went to the World’s Fair in New York for their class trip and the year of their 50th reunion, they showed pictures and talked about their adventures at the fair.

The first scholarship was given in 1956 with a committee appointed from the membership to select the recipient. The first few years, only one person received a scholarship and then it was expanded to several depending on the amount of money received for that purpose.

The 100th anniversary annual meeting was held on October 21, 1972 at the Lincoln Street School with a reception and tea in the afternoon and a supper in the evening with entertainment – the Mulligan Guards. And in 1979, the group had guided tours of Algonquin Regional High School. Graduates of Algonquin were again encouraged to become involved in the association.

During the annual meeting in 2005, a plaque was dedicated naming the Municipal Building for the former principal of Northboro High School Elwood S. Fraser. Also a statue of a Minute Man donated by Mr. and Mrs. William Maney was placed on the front lawn of the Municipal building and dedicated at the same meeting.

The Class of ’59 was the last 50-year class to be honored. The class chose to have that annual meeting at the White Cliffs in Northboro and made it a memorable event complete with a fashion show and some other entertainment.

In planning the annual meeting, the format changed to a luncheon gathering which was held at the Knights of Columbus Hall in Westboro. Some felt the meetings should be held in Northboro and so the following two years, the group met at the Northboro Senior Center continuing with a luncheon meeting.